Drawing Out The Dragons

As a writing teacher, I read a lot of books about writing.  My former students will attest that I rank Stephen King’s ON WRITING as, quite possibly, the greatest book on the subject.  I am also partial to John Gardner’s ON MORAL FICTION, Christopher Vogler’s THE WRITER’S JOURNEY and the classic ELEMENTS OF STYLE by Strunk and White.  This fall, I’m planning on adding a new volume to the reading list that I hand out on the first day of class, and it is that new addition that I want to write about today. 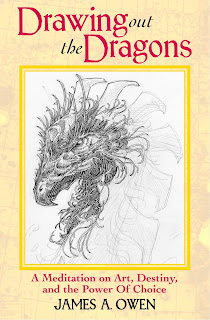 DRAWING OUT THE DRAGONS isn’t exactly about writing.  Some of it is about drawing, about comics and being young and dreaming, but mostly it’s about never giving up hope.

Can you identify with that?  Have you ever felt like Stuttering Bill or Ben Hanscom or one of the other Losers in Stephen King’s IT?  Have you ever felt like every wheel and cog in the universe is working against you?  That you are doomed to see your dreams die?  I’ve been there.  I think everyone that sits down at a keyboard and attempts to turn blank pages into a story has probably been there as well.  In DRAWING OUT THE DRAGONS, we read the story of a comic book artist who lived through incredible circumstances (I imagine that the IT loser he relates to most is Eddie Kaspbrak) including having his drawing hand crushed, only to pick up the pieces and write a bestselling series of YA fantasy novels.

James A. Owen is best known as the author of HERE THERE BE DRAGONS, the first book in the Chronicles of the Imaginarium Geographic series.  It’s a story that takes The Inklings (J.R.R. Tolkien, C.S. Lewis and Charles Williams) and turns them into swashbuckling heroes and protectors of meta-world that touches our world.  It’s a great series, full of hope and adventure (and references to everything from Mark Twain to Neil Gaiman).

DRAWING OUT THE DRAGONS was released as an e-book earlier this year, and now Mr. Owen has launched a Kickstarter Project in order to bring the book to print.  I’m telling you straight out, I want to be able to tell my students to go out and buy this book.  If the project fails, the e-book will always be there, but I believe that there is something special, almost magical, about a tangible book that you can hold in your hands and smell and dog-ear.  If anything deserves to see print, it’s DRAWING OUT THE DRAGONS.  That’s why I’m asking you to support this book.  Buy the e-book, the hardcover, whatever, but read it, it will remind you that no matter what happens, there is always hope.

You can find a link to the DRAWING OUT THE DRAGONS Kickstarter Project here: http://www.kickstarter.com/projects/1401678214/james-a-owen-the-drawing-out-the-dragons-project